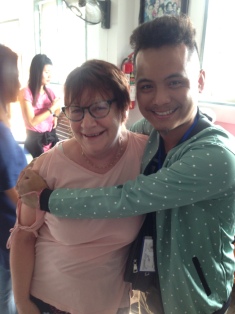 This is an annual event, and is much appreciated by students from both institutions. The refugee students really enjoy the novelty of going into town ( they have to have camp passes to do this, which cost money and are therefore rarely available) and the Harrow kids get to meet with young people who are in a very different situation to their own. They also use this visit to help them achieve an in-school award, which sounds similar to the Duke of Edinburgh award we have back home.

We did quite a few things over the week end, including a visit to the SAW orphanage, where the students organised various sporting events and a fashion show.  The latter consisted of making outfits from bin liners, newspaper and coloured paper/plastic bin liners in purple and orange. The creativity they displayed was very impressive.

We shared meals together in different restaurants and had a swim in a public pool. We also had our very own ice cream vendor. First time I have ever had sticky rice with ice cream! It was actually very nice.

I asked my Mae La students to write about the week end when I saw them today. Their responses were very interesting. Many of them had never swum in a pool before, and most of them had never visited a shopping mall, so both of these activities went down well. They all commented on how expensive things were in town, which was not surprising, and they all commented on how much they had enjoyed making new friends with the Harrow students.

From a teacher’s point of view ( well mine at least) it was so gratifying to see how the two groups immediately took to each other and began playing games right from the start. It goes without saying that their lives and backgrounds could hardly be more dissimilar, but they connected with each other straight away. For my part I am glad to have been a part of the experience, and to have seen the genuine respect each group had for the other. It was exhausting though!

As you can see from one of the photos, the job satisfaction is off the scale. The student hugging me has chosen the nickname “Mountain”. I also have an Orange, a Snow, a Sweet, a Lolla and a Yellow. We ask them to give themselves a nickname because we are so rubbish at remembering their Burmese names, which can be quite convoluted. Their choices can be surprising, ranging from Jack to Mr Goldenberg. I have no idea where they get them from!

I am actually dreading doing the official exam entries for these groups as the Karen, along with most other Burmese peoples, do not have family or surnames, and our systems are just not set up for this. They will be sitting the Cambridge KET (Key English Test) in March, which is a very valuable qualification that is recognised worldwide so I really need to make sure I get the entries, and the names that will go the certificates, right.  No pressure then.

Meanwhile, back in Mae Sot, my other class of migrant workers is taking part in a “linking” exercise with the students up in Mytkinya in northern Burma. They will write to each other, and the tutor from Mytkinya will act as courier when she visits at the week end. The trip is not a straightforward one, so I’ll be interested to see how long it takes her to get to Mae Sot as I’m hoping to go and visit her within the next couple of months. I think I have to  go via Yangon, or possibly Mandalay, who knows? It’ll be yet another adventure for me anyway.

Signing off now because its getting late.

Till next time folks,

View all posts by sifucaroline

links to some basic moves for beginners